The gesture Namaste represents the belief that there is a divine spark within each of us that is located in the heart chakra. The gesture is an acknowledgment of the soul in one by the soul in another. 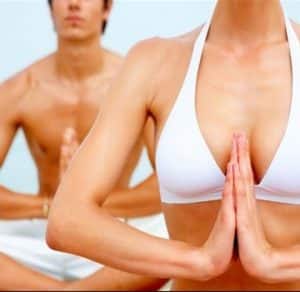 The gesture Namaste represents the belief that there is a divine spark within each of us that is located in the heart chakra. The gesture is an acknowledgment of the soul in one by the soul in another. Nama means bow, as means I, and te means you. Therefore, Namaste literally means, “I bow to you.” I once took a yoga class where the instructor began to lecture about being Namaste in life at the end of our lesson. She went on to tell us that by living our life the way we feel during Savasana (body like a corpse, total relaxation) we would have more peace and commitment in our lives. As I lay there reflecting on her words I agreed she was right and was thankful for the ending she gave us to that deeply powerful class. Some of the students lingered a while to talk while rolling up their mats but eventually everyone trickled out of the studio. I’m sure the instructor thought everyone had left by this point, but I was using the restroom. When I came out and began to collect my belongings I heard very loud voices. I walked closer to the office and to my surprise I heard my teacher cursing and yelling to another woman about the business. I could not believe it and so I pushed open the door and told her to be Namaste. She looked at me with an extremely perplexed face because I knew she was not honoring her own words that she had preached to the class less than ten minutes ago. As I walked out of the studio I kept contemplating: Is this a script she just uses in every class? How is she able to deliver these words to a group of people and not follow her own beliefs? I was so entrenched in thought by the whole experience and it made me think very carefully of the yoga world and how America has so blindly followed into this trend since Madonna did her first downward dog.

As a Shaman, during my training I was always held to a certain level of spiritual belief that words and actions are married to you in spirit. I was speculating; does it hold true to yoga teachers? Does this practice which has reached us from ancient lineages that teaches us spiritual discipline about maintaining peace and reaching Moksha (liberation) been reduced to just health and wellness? Or is the spiritual way of humility and humbleness being honored now that it has reached the western world? In my many worldly travels I have met Yogis from India, and I have never come across them having disputes with anyone they have come in contact with. Even when they were upset by something it was handled in a respectful, peaceful way with clear communication. After that experience at the yoga studio I began to take notice of more of these hostile interactions showing up around yoga teachers here in the States.

I was at an event where this woman was getting upset with a raw chocolate dispenser who was setting up near her table. She was so angry and irate with her, she started calling her names and fighting with her about her booth space being taken up. I was speaking at this event and as I walked around to meet other people doing creative things in the community I made my way over to that area to sample the chocolates. While I was there I came upon a very dear friend from San Francisco who happened to know the lady with a health and wellness booth next to the lady selling chocolate. I of course said hello and she said she had heard a lot about me and it was a beautiful friendly encounter. I knew that this was the same woman from earlier who had the altercation with the chocolate dispenser. As we talked I asked her what she did and she told me she was a yogi and owned a yoga studio and health and wellness company. My first thoughts were: wow, another yogi with anger issues. In my understanding I was thinking it could be normal, I’m not of that world, however I do know that the spiritual world encompasses you surrendering the ways you would act if you were to be mundane and act with more love and compassion for others was not being acted upon yet again. So time went on and I was too busy speaking and traveling to pay more attention to these prevailing thoughts.

Shortly thereafter my girlfriend who is a well-known model asked me to go with her to a yoga class. She went on to tell me that the instructor of the class was a pure yogi and is amazing at what he does. I thought to myself this would be a great way to spend time with her and get in balance with my body so I attended with her. When I arrived the studio was very bright and airy and the teacher came in wearing all white. I noticed his cotton white pants were very sheer so much so that you could see his entire package. He had a very all American look, blonde hair, and blue eyes. Very good looking. The entire class looked like the backstage of a Tommy Hilfiger runway show. Everyone was dressed extremely scantily clad. My girlfriend looked over at me and smiled. During the class I noticed a girl who did not ask for help was being approached by the instructor to assist with her poses. During the entire class he never went up to a single male, he would only help the ladies. I started to laugh and my girlfriend looked at me asking me what was so funny. I continued the class thinking the instructor had found his Namaste. The whole thing was very comical to me. It should have been called 3rd base yoga. I believe he even had a semi after class. He smiled so much during the class and now I know why.

After the class all these women went up to him to ask him questions and I just laughed more and more. My girlfriend again asked me why I was laughing so much during class. It made for a great conversation during lunch afterwards.

Since then I have run into numerous yoga teachers all over who act with anger, rage, and attitude with other people. There are a lot of people who are yogis and teachers who follow the principles that yoga stands for — honor the sacred origin of where it derives from out of India. I hope that people who practice yoga know that it is a tool to assist you into being liberated. However, it is you who needs to be willing to surrender to its deep inner lesson of self-love, honor, mindfulness, and physical harmony and most of all, NAMASTE.