STEPPING INTO YOUR OWN POWER WITH SHAMAN DUREK VERRETT 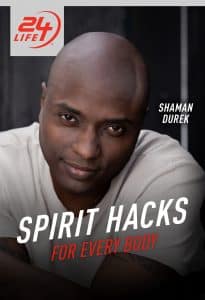 For most of us, shamanism is an unfamiliar term—one that conjures up visions of tribal healers communicating with the spirit world, not no-nonsense practitioners of guided self-help.

Durek Verrett, a fifth-generation Ghanaian healer and spiritual guide to tech giants such as Dave Asprey and celebrities such as Gwyneth Paltrow, wants to change our ideas about this ancient practice, with the forthcoming release of his book “Spirit Hacking: Shamanic Keys to Reclaim Your Personal Power, Transform Yourself, and Light Up the World” (St. Martin’s Essentials, October 2019) in addition to his podcast and new online course called The Shaman School.

Verrett, a native Californian, argues that shamans are the original holistic practitioner, studying everything that affects our daily lives—from physical health and diet to cultural indoctrinations, use of technology and belief systems, in order to help people find their blind spots, tap into their energy and better thrive in today’s troubled times.

“A lot of times people have this misconstructed idea of what shamanism is, and they get caught up in the idea of it being so woo-woo,” Verrett says. But, he argues, shamanism is really about giving people the tools to increase their emotional intelligence and be more aware of what’s working for them and what’s holding them back.

The better you are able to see yourself, he argues, the more energy and power you’ll have to transform your life and make a difference in the world.

Some of our biggest problems as individuals and society as a whole, he says, is our need to press our ideas and beliefs on other people—whether it’s our children or other adults in our lives.

Verrett argues that our society has become more divisive in recent years as we’ve adopted more of a masculine us-versus-them mentality, creating dissonance between groups in order to ensure our own survival. Instead of thinking preservation for all, many of us have been focused on creating a safe place just for ourselves.

But, he says, this compartmentalization is dangerous at a sociological level and will ultimately destroy the fiber of our culture, creating more lack for all parties. Just as nature gives generously, he says, providing the abundant resources we need to live, we shouldn’t hoard our emotional resources, focusing only on the “me” instead of the greater “we.”

With more selfish cultural attitudes developing around the world today, he says, we are in danger of not being able to adapt and save Earth.

“Everyone’s like, ‘Save the Earth, save the Earth,’ and that to me is a bunch of nonsense,” Verrett says. “The Earth is going to be fine. Save our species.”

Working with a shaman

The first thing that Verrett wants you to know about seeing a shaman—particularly a spirit shaman—is that they are not in the business of healing or fixing people. When someone says they have a session with him, he corrects them.

“You’re having a session with yourself. … This has nothing to do with me … it’s them integrating with themselves,” Verrett says.

Whether he’s seeing a CEO or a teenager struggling with anxiety, each experience is different. But most sessions start at a similar place, with him looking at your veins to see how the blood is flowing and if there’s inflammation, pressing on your liver, checking your skin, your tongue, eyes and temperature, asking questions about your diet and doing a scan of your cycle of thoughts and emotions—the ones, Verrett says, that are part of your “operating program.”

Some of these thoughts may be keeping you in a bad place, dating horrible people or staying in a job you hate. In this case, Verrett questions why you are there and what you think you are getting out of it. That, he says, often triggers a so-called aha moment for people.

The problem, Verrett says, is many people have lost touch with that understanding of themselves and are letting other people dictate their reality.

Creating from the center

Rather than following what instinctively feels right and good to us, we’re worshiping the cult of celebrity, and because of it, we remain unfulfilled.

“We have become a culture of people that believe the only way we get love is to create something, own something, achieve something and get people to see something” on social media or other social networks.

Rather than working out to show our body some love and enjoying the strong feeling, we’re working out to look better on Instagram. We’re going vegan to fit in with our yoga tribe, not because we love the energy we have after a plant-based meal.

We may be healthy, but we’re still talking about ourselves in very unhealthy ways, exposing ourselves to toxins and then thinking it’s OK because we hit the gym.

Optimum health, Verrett says, focuses on not just the physical but also your emotional, mental and spiritual aspects and learning how to take better care of yourself on all fronts.

That’s important, he says, because what we think about our situation largely dictates it.

“If we tell ourselves that we’re not smart enough, our system lowers our functioning and awareness so it matches exactly what we say or think,” Verrett says. If you’re constantly beating yourself up about your health, “you become less productive, less able to step into the space of working out, honoring your body, eating the right foods and all of that.”

Likewise, he says, in an effort to please people, more of us are giving until we have nothing left, which leaves us feeling angry, agitated, stressed and full of anxiety.

“Your life is not supposed to be that way,” Verrett says, and people should only focus on doing for others when we have a surplus of energy ourselves.

Think of your body and mind as a space suit, he says. You’re only going to get one, so you better take great care of it.

“Once you realize this,” Verrett says, “you will see what it means to have responsibility and show up with love and care and respect.”

That means celebrating the end of bad choices, too, such as having a breakup party after ending a relationship that wasn’t healthy or celebrating when you get laid off from that job you hated.

“We should be celebrating,” he says, “every time we’re doing something that’s honoring our truth.”

Daily rituals to raise your vibration

It’s important to start and end each day with practices that support higher energy and better mood—rituals that should become as automatic as brushing your teeth or taking a shower.

For Verrett, that means jumping out of bed with the message, “I love my life. I love how everything’s always working out of me … how things are always showing up for me.”

Those self- and life-supporting affirmations could sound like, “I love how I walk in the room and people love my energy” or “I love how prosperity is always flowing in my life” or “I love how smart and intelligent I am.”

Throughout the day, pepper in a little self-love:

Most of all, Verrett advises, try to make whatever you’re focusing on each day fun. Whether it’s the gym or a project at work or school, if you’re just muscling through and not finding the way to make it engaging, he says, it’s going to fizzle out.

Instead, he says, focus on going to the gym because it makes you feel empowered.

Verrett also recommends that you take inventory at the end of the day, examining what inspired you, what you did to care for yourself. Evaluate your conversations that day. On balance, were they empowering and uplifting or draining and based on complaining? Did you feel energized or tired and sluggish?

Taking this inventory can help you make small adjustments the next day to improve things, such as kindly asking friends who are gossiping about someone if you can talk about something else positive or beautiful in their lives.

The idea, Verrett says, is to look for ways to reframe and build the right energy into your day so you’re able to get more out of it.