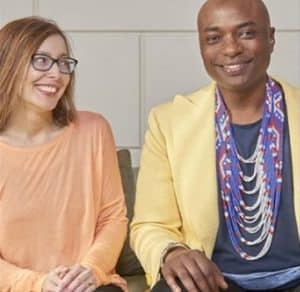 The new A-list must-have: a personal Shaman Durek Verrett’s celebrity clients are queueing up for his ‘spiritual detox’, but could he heal Anna Maxted’s sore hip?

The following article is re-produced with permission from The Times Newspaper, UK.

As if hot yoga and chia seeds weren’t sustaining enough, the latest celebrity trend is to have your own shaman, who mediates wisdom from the spirit world on your behalf. And Californian Durek Verrett, a healer, is the A-list’s spiritual guide of choice. He’s in London to see clients and we meet in the elegant suite of a London hotel.

Shaman Durek, as he calls himself — 42, tall and resplendent in ornamental beaded necklace and a bright patterned robe — sweeps me into a long hug (“I don’t shake hands”).

His sessions are £300 an hour and he often works with high-stress, high-powered individuals, billionaires and superstars. Gwyneth Paltrow, predictably, is client and friend, and he has worked with the actress Selma Blair and the singer LeAnn Rimes.

“I offer people their true self,” he says. He means he helps clients to prioritise what matters via information received from the other side, and by mind-reading (“Mmm. No,” he says later, when I claim I’m fine burying certain frustrations, “that’s not what you believe. I just read your thoughts.”). In so doing, he enables them to find love, work, quit addictions and shake off stress.

A shamanic session releases blocked energy and revitalises you, although he says: “It’s not me doing it to you. I’ll . . . put in the energy, but it’s your spirit that does it. It’s about using and building the power inside of you.” His UK clientele is growing. Our particular problem: “The British don’t communicate their real feelings, so they become passive-aggressive and take it out on other people.”

Celebrities, chief executives, moguls — “rock stars in their business” — often seek his assistance with their “train-wreck” personal lives. They thank him for “pulling the curtain back on their bullshit” and showing them how to be authentic.

He is enchanting, but I do think: “What can he tell me?” My preoccupations are small fry. My hip aches persistently, and having just seen an animal charity’s photo of four dumped, dead kittens, I feel sick about people’s cruelty.

I sit on a sofa, Shaman Durek holds my hands in his, and talks. “You give way too much of yourself,” he says. “Your energy and what you’re giving out all the time is so much, there’s not much left for you. You’re creating so much worry inside of your body.” He looks up, addresses thin air. “Council members, put up on the walls what she’s worrying about — she’s creating worry and fear around loss and the feeling of separation and not being able to control the people in life who she loves because they’re going through difficulty.”

I’m mesmerised. But who are these council members pontificating on my business? They are, says Shaman Durek, “people who lived at one time”. People who knew me? “Everything on the other side knows you.” So they don’t identify themselves? “I can speak to a certain person. If it’s a family member coming through, it’s, like, ‘I’m the father, thank you for helping her’.” So did you speak to him? “Your family member was watching, but I was talking to your guides.” So they’re just general spirits? “No, they’re your ancestors, your lineage.”

As if to prove a point, he asks my spirit guides what’s most important for my “spiritual evolution”. Their answer: “It is important for her to recognise her issues around animals, around children . . .” He tells me: “Your activist has a thing for innocence. It wants to protect animals, children. There’s a part of your being that feels the unfairness of how these things are being treated on the planet.” Another prompt from the spirits: “She carries a lot in her back and we want you to clear the things around her spine, and also her lower hip.”

I’m speechless. I do have an issue with my hip and my main reason for using social media is to repost images of cute puppies and missing cats. He’s certainly forthright. “Your elbow here has a notch, which means you’re not getting enough fulfilment sexually,” he says. “You’re shutting down your pleasure gates and this is something you cannot do. Let me ask you,” he says in that rich American accent, “why do you feel you’re doing that?”

“Hmm. Council members, she’s not sure that she is. What do you have to say to that?”

His sessions have been described as a “spiritual detox” and it’s a curiously intense hour. Now I lie on the couch while Shaman Durek sits beside me, ordering the spirits to infuse my body with electricity, power and light — “spirits of the light . . . shock her body at 100. Take a deep breath, so you can receive it . . . you feel that?” He won’t let me close my eyes, so I can’t claim “hypnotherapy”, and while some of what he says sounds nonsensical, my body buzzes, pulses and tingles, as if with electricity. “What is that?” I say, accusingly. He bursts out laughing.

He ends with sonorous chanting from “the ancestors of many tribes: African, Inuit, Mongolian, Haitian and many more. I just let them take over me.”

Then he tells me to raise my hands and say: “Electricity, increase. I want to feel more.” I do, and gasp, “Oh-ha! That is astonishing . . . I can feel pulses in my fingertips!” It’s the oddest feeling: crackling electricity, like something out of Harry Potter.

That, he says, is “how you know if spiritual things are real or not. If you get healing from someone, and it’s like you’re having a spa day, you don’t feel anything, it’s because there’s nothing happening. Your whole being has to connect to the spirit world for you to feel something.” Otherwise, he says, “to me, it’s fluffy bunnies and fairytales”.

Shaman Durek is a charismatic mix of the ancient and modern — he posts on Instagram, loves “non-violent” video games. He doesn’t, he says firmly, “sit in the jungle in a coconut tree and hand out medicines”. Neither does he dispense the hallucinogenic drink ayahuasca — taken in shamanic ceremonies, illegal in Britain and in the US, and a craze among ex-party animals desperate to find themselves — which he sees as just another drug “to be dependent on”. He says he deals in “real energy”.

Our shamanic session felt powerful but, I venture, rudely in the circumstances, that sceptics such as my husband would say it was all in the mind. “Most people I work with are sceptics. Sceptics are protecting themselves from the unknown,” he says.

Am I just suggestible? Could this be a physiological response? “How is it?” he replies equably. “I wasn’t suggesting anything.” I feel like I’ve ridden a rollercoaster, heavy, yet light-headed. (No wonder an assistant brought in a bucket — some clients are sick.) Does my hip ache less or do I just want to believe?

“Very weird,” I say with a sigh. “It’s not,” replies Shaman Durek. “It’s about showing people the power that they have.”