WHAT ARE SHAMANIC SYMBOLS?

As I’ve known them, when learning about shamanic symbols, they are like zip files where so much information needs to be condensed into something small.

Imagine someone has given you a set of scrolls with many steps to complete. You need to condense these scrolls of information to learn and use one healing technique. The way that the ancients solved this issue, is that they took all that information as energy and put it into a symbol.

When the energy is placed into the symbol, it holds all that knowledge and information.

When you use the symbol, you’re activating all of the steps but through use of one step – drawing of a symbol – instead of having to go into a long sequence of reading and doing multiple tasks.

In ancient days we were taught and learned how to generate information into energy, and energy into symbol. Symbols can hold a lot of power efficiently.

The importance and use of symbols is because they represent energy patterns designed to a specific affect using efficient means.

Sometimes, spirits are influenced by the use of a symbol that resonates with their energy and it can lead to working with them. Other times a symbol can protect you from the energies of spirits you don’t want to engage with.

In some pagan cultures, you can see patterns across their symbols and meanings. For example, a protective symbol contains hard edges, whereas a circular symbol is often used for containing energy or creating a cycle.

Historically, symbols (and words) of great power have been perverted. This is usually through those seeking to re-direct powerful, devotions of energy to be transformed into something that serves them.

One famous example is the swastika. The Swastika was formerly a symbol used by the Buddhists for ‘eternal’. Before WW2, the Nazis movement stole the Swastika and re-tooled it as ‘the crooked cross’, somehow meaning Aryan superiority.

The Christian Cross as a symbol is a great example of a conflicted symbol, as it commemorates the worst point in Jesus’ life.

Think about it; would you want people to celebrate you by wearing a symbol representing the most painful time in your existence? Yet, people wear the cross as if it honors him.

Many symbols used by ancestral shamans and mystics have been passed through generations of bloodline, gaining power through each generation continuing the traditions.

Evidence of these symbols have been found in cave art and the traditional paintings and carvings of indigenous cultures.

Across Native American, Meso-American, Druidic, Pagan and Middle Eastern, you can see patterns and common ideas in the known symbols. Spirals, repetitions of 3, circles and crosses.

You can see the influence of culture in the design of the symbol when you hear the stories of the symbol’s background.

Sigils are another form of symbol, often associated with archangels. Today, this tool is gaining popularity among witches.

Sigils are similar to symbols, though carry set ritualistic processes in their creation.

For example, a modern witch will take a word, remove the vowels and duplicate consonants, and connect the remaining letters intuitively, to form a jagged, gnarly shape. A finished sigil rarely looks like the word it was meant to represent, but the intention, attention and connection to the creator allows it to be effective.

With aligned intent, a witch will carve or draw this shape onto something, and staring at it, activate its power.

Ancient Sigils used slightly different means to come to a final shape. Some drew shapes based on a letter disc. Others simply mixed relationships with different symbols to carve a new one. 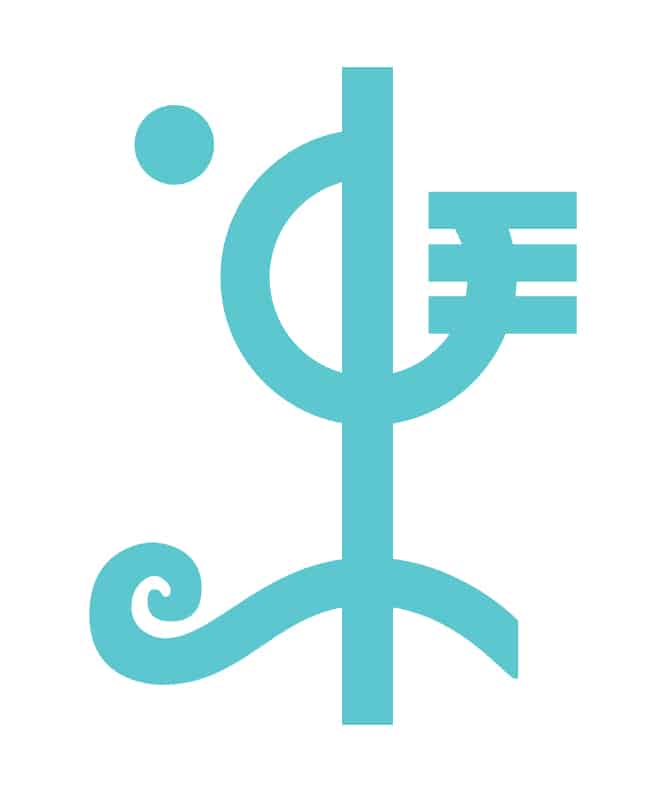 Do I have a personal favorite? Of course.

The Quinterium was a gift from my spirits, and is on every page of this website in honor of their request made to me.

The energy it represents took a 17 year process to build and involved many steps.

The Quinterium was given to me in Ephesus. I was standing where Mother Mary spent her last days, on top of the mountain.

After I drank the water where people go to receive healing, three building-high beings came to me.

They gave me the symbol and told me to write it down and bury it for 17 years in the Earth.

So I did what they asked. I rolled the image up in a scroll, put it in a box, covered it in soil and kept it there for 17 years.

17 years later, I went to dig it up and brought it to the world as they told me to.

When people use this symbol when using their gifts, or during a healing, it amplifies and increases the energy connecting to the spirit world.

There true beauty of this symbol is how much it contains with in it. Here are the many things it does to those who learn to connect with it:

The Quinterium also holds the energy of all the elements. It connects to all the different spiritual realms in all the directions including the above and below. It holds the foundations of ancient wisdom, of ancient healings, ancient magic and connection to the elements and the essence of life itself.

It connects to off-worlders on other planets and is a gateway key and the connector key to other dimensions, keys and realities.

As you can see, it was worth the 17 year wait. It was a gift given through me to be shared in service to everyone. It is here for you to use it.

This includes special meditations, guest conversations and messages of love. Some of this content can also be found on his Instagram channel. Check out these lit videos and click the button below to Subscribe.